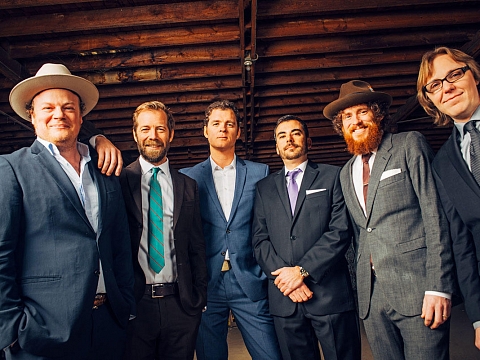 Steep Canyon Rangers have been on a journey that is uniquely their own. The band started in college at UNC-Chapel Hill, then dove head first into bluegrass in its most traditional form, and over the years have risen to the top of the bluegrass genre headlining top festivals such as Merlefest and Grey Fox Bluegrass. Only to then be discovered by Steve Martin, famous actor and banjo player. Martin has taken the Rangers on a nearly decade long tour introducing them to hundreds of thousands of new fans and giving them prime time TV exposure. This has helped SCR become the most recognizable modern name in bluegrass music. The band has continued to tour extensively on their own, without Martin, and have expanded their genre into country and Americana with the addition of a drummer, alongside an incredibly versatile bassist - to accompany the original core band. The Rangers are big players in the bluegrass/country and Americana scene today. They are often compared to predecessors The Band, Nitty Gritty Dirt Band, and the modern Zac Brown Band.

This event is being sold at full capacity with no social distancing in the seating area. Proof of vaccinations and/or a negative COVID test within 72 hours of this event is required, and we strongly recommend audience members to be masked indoors when not eating/drinking. By purchasing a ticket to this event, patrons are agreeing to adhere to the health and safety policies that are in place on the day of the event, per CDC, artist, and The Walker Theatre.