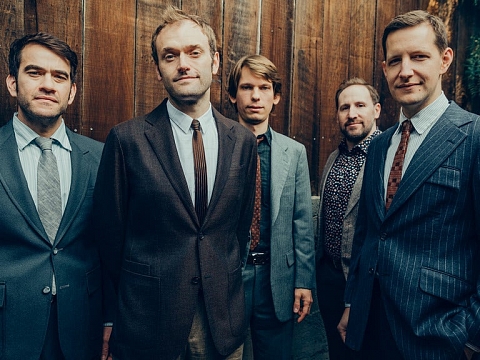 In November of 2020, when the world felt so full of uncertainty, the Grammy-winning folk band Punch Brothers did the one thing that they could rely on: they stood in a circle, facing one another, and made music together. A weeklong recording session, after quarantining and little rehearsal outside of a few Zoom calls, had culminated in their new record, Hell on Church Street—a reimagining of bluegrass great Tony Rice’s landmark solo album, Church Street Blues.

Hell on Church Street is a potent work by a band realizing its own powers and returning to the foundations of its music. The record finds the band at its most spontaneous—taking risks, listening deeply to one another, and approaching the music with a kind of immediacy only accessible to musicians of their particular ability who have also forged a deep trust over their decade and a half together. Bassist Paul Kowert considers this album to “harken back to our early days in the band when we were playing regularly on The Lower East Side, learning all this new material to expand our sonic arsenal.”