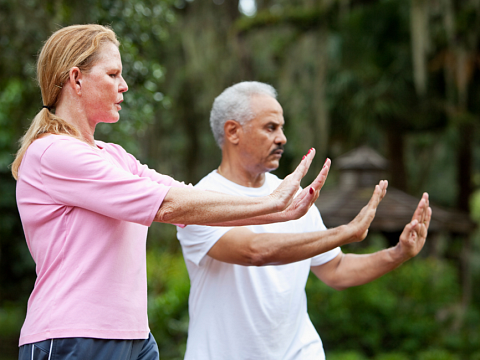 Wing Chun kung fu is a martial art made famous by Bruce Lee and his teacher Ip Man (see the movies). Meditation Wing Chun (created by Charlie Newton) utilizes gentle low impact exercises to facilitate mindfulness and relaxation for wellness, health, and fitness to increase energy and generate enormous power. The forms are easy to learn and may also be used for self-defense. This system incorporates elements of Tia Chi and Chi Kung.

This program is especially beneficial for those over 50, women and children. It is adaptive (to any physical limitation) and does not require strength.

This introductory series will teach you the basics of Meditation Wing Chun. This series takes place over five sessions, starting on Wednesday, May 26 at 9:30 a.m. and concluding Wednesday, June 23 at 9:30am. You can sign up for classes individually for $20 per class or the entire series for $90 (a 10% discount!). The entire series is hosted on Zoom.

Charlie Newton began his journey in martial arts in 1971 studying Shotokan a hard style of Japanese karate while still a student at UTC. After achieving his brown belt in the fifth year his instructor moved to another city 3 weeks before Sifu Newton was scheduled to test for his Black belt. Sifu Newton began his career as a professional artist receiving his MFA in 1987 from Old Dominion and Norfolk State Universities. He then traveled to Europe on scholarship from The University of Georgia's Studies abroad program as a teaching assistant to artist Wadsworth Jarrell.

In 2005 Sifu Newton began studying Wing Chun completing the system in 2015. Since then he has taken private lessons from masters in England And America.