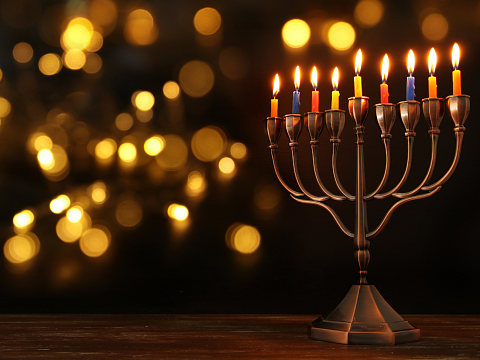 If only the spelling of Chanukah (or Hanukkah?) were the most complicated part of the holiday. It is a Jewish holiday whose story does not appear in the Jewish Bible, and whose customs have evolved as a "Winter holiday," becoming distanced from its original meaning. It is technically a minor holiday that receives a disproportionate amount of attention, because frankly, it's more fun, filled with light, presents and fried food. Well grounded in historical experience, and enhanced through stories of miracles, military and otherwise, it is a unique holiday that many celebrate, but few truly take the time to understand. In this class, you'll learn all aspects, the history, the legend, the celebration, and yes, even the spelling.

Please note: the proceeds from this class will go to Mizpah Congregation Rabbi’s Discretionary Fund, which supports community members in need and other non-profit organizations.

Rabbi Craig Lewis serves Mizpah Congregation, a Reform synagogue in Chattanooga. A graduate of the University of Kansas (Rock Chalk Jayhawk), Rabbi Lewis also studied business in France before beginning his studies to become a rabbi. After spending his first year of seminary at the Hebrew Union College - Jewish Institute of Religion in Jerusalem, he continued his studies at the school's Cincinnati campus where he received ordination in 2008. Before coming to the Scenic City, Rabbi Lewis served congregations in Illinois, Indiana, Ohio, California, and Nebraska. He enjoys running, bike rides, cheering for the Kansas City Chiefs and Royals, the Marx Brothers, and keeping up with Disney, Star Wars and Marvel. He has been married to Jennifer for almost 19 years and has a son who attends the Center for Creative Arts. Their house is filled with pets, books, Jewish art, and bad puns.