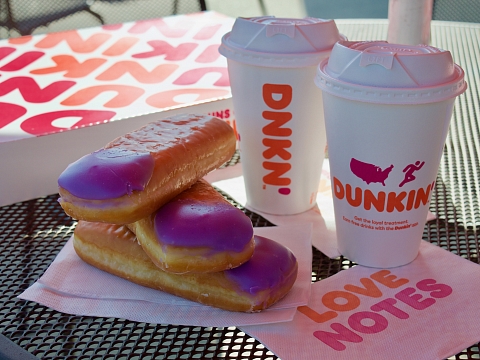 On October 20, guests who donate $2 to End Polio Now at one of the 123 participating Dunkin’ restaurants will receive a Purple Pinkie Donut as a “thank you.” As an added bonus for each $2 guest donation, area Rotary districts will donate $4 and the Bill & Melinda Gates Foundation will match with $12, for a total donation of $18.

The Purple Pinkie Donut is a glazed donut stick with a dab of purple frosting, which symbolizes the purple painted pinkie of a child that has been vaccinated during a National Immunization Day in countries where polio is still a threat.

In 2018, Dunkin’ and Tennessee Rotary launched the Purple Pinkie Donut fundraiser in 30 Dunkin’ restaurants throughout Tennessee in efforts to support End Polio Now! To date, the Dunkin’ and Rotary promotion has raised more than $600,000 to benefit End Polio Now in recognition of World Polio Day. With the expansion to this year’s program, Dunkin’ hopes to raise more money than ever before to eradicate polio worldwide.

In countries where the threat of polio remains, children receive their polio vaccine via drops in the mouth, rather than injection, allowing millions of children to be vaccinated in a short period of time. Vaccinating so many children can be difficult to document, so when each child is vaccinated, they have the pinkie fingernail of their left hand painted with a permanent purple marker. The mark turns brown and lasts for one month allowing vaccinators to check a child’s finger to determine whether they have already received the vaccine.

More than one million Rotary members have donated their time and personal resources to end polio. Every year, hundreds of Rotary members work side-by-side with health workers to vaccinate children in polio-affected countries.

Rotary is committed to raising $50 million a year to be matched 2-to-1 by the Bill & Melinda Gates Foundation, yielding $150 million for polio eradication activities every year. To date, Rotary has contributed more than $2.1 billion to fight the disease, including matching funds from the Gates Foundation.

In 1988, polio paralyzed 1,000 children every day in 125 countries. Today, thanks to the efforts of Rotary and its partners in the Global Polio Eradication Initiative, there have been fewer than 130 cases of wild poliovirus reported in 2020 across just two countries, Pakistan and Afghanistan. But as long as a single child has polio, all children are at risk, which underscores the need for ongoing funding for polio eradication activities.