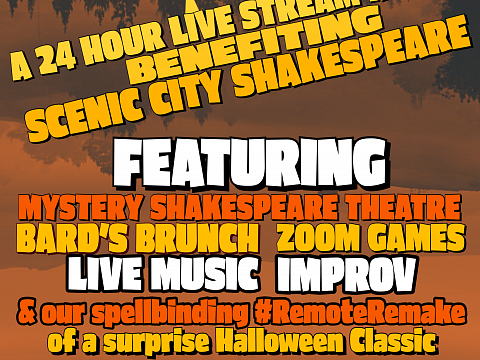 Halloween@Home is a 24 Hour LIVE “Stream-a-thon” benefiting Scenic City Shakespeare. This event will be available on Facebook Live & YouTube and feature Live Music and Comedy, a classic horror movie marathon, remote brunch, costume contest and some spellbinding surprises! Follow along LIVE or catch the highlights at ScenicCityShakespeare.org

Scenic City Shakespeare is a new 501c3 nonprofit established in September of 2019. After cancelling their scheduled season in March, “Scenic City Shakes” transitioned to fully #RemoteTheatre productions. The Creative Team coined this term to describe their unique way of blending traditional and cutting edge techniques to put actors in their homes together on one virtual stage. Their debut production "Pyramus and Thisby: The Most Lamentable Comedy", an adaptation by Founder & Artistic Director - Ryan Laskowski, was recently featured during The Utah Shakespeare Festival's Wooden O Symposium. Their next production, Malvolio, A Sportful Malice - adapted from Twelfth Night by Education Director Emma Collins - was featured on opening night of the Stage on Screen Theatre Festival presented by The City of Santa Clarita, California. Proceeds from Halloween@Home will go towards continuing their mission to Engage and Inspire through theatre.