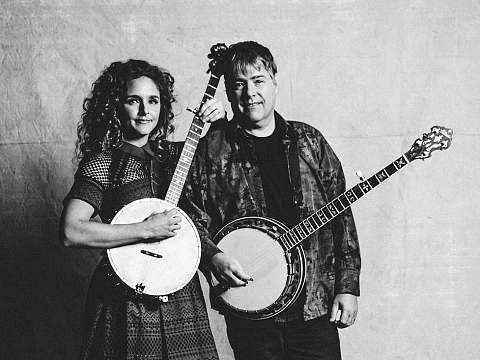 With one eye on using the banjo to showcase America’s rich heritage and the other pulling the noble instrument from its most familiar arena into new and unique realms, Béla Fleck and Abigail Washburn’s second album Echo in the Valley is simultaneously familiar and wildly innovative.

“Some of the most interesting things in the world come together in strange and unique ways and show our diversity,” reflects Béla, a fifteen-time Grammy award winner who is often considered the world’s premier banjo player. “The banjo is just one of those things. It’s a great example of how the world can combine things and create surprising hybrids,” a reference to the ancestral African roots of the banjo combining with Scotch-Irish music in Appalachia.

Echo in the Valley is the follow up to Béla and Abigail’s acclaimed, self-titled debut that earned the 2016 Grammy for Best Folk Album. This time around, the mission was to take their double banjo combination of three finger and clawhammer styles “to the next level and find things to do together that we had not done before,” says Béla. “We’re expressing different emotions through past techniques and going to deeper places.” The results are fascinating, especially considering their strict rules for recording: all sounds must be created by the two of them, the only instruments used are banjos (they have seven between them, ranging from a ukulele to an upright bass banjo), and they must be able to perform every recorded song live.