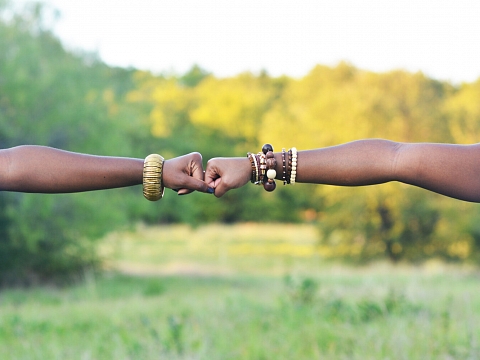 Join The Chattery and The UNFoundation as we celebrate local Black creatives in recognition of Black History Month.

Before the event, starting at 5:30 p.m., enjoy adult beverages provided by the UNFoundation. UNFoundation will give a quick 15-minute talk on grant writing, followed by the opportunity to chat with a board member about your idea and the best ways to get it funded. For February, the UNFoundation is giving away $3,000 towards an arts project led by a Black creative. The deadline is Monday, February 24th at midnight. Their easy-to-use application is here.

Then stick around and you’ll hear from a panel of influential Chattanooga creatives on their entrepreneurial journey and learn how to be successful in your own business or creative venture. Also hear from the panelists as they discuss effective and efficient ways to increase visibility as a Black creative.

Born and raised in Chattanooga, Jordan Scruggs is a communicator and activist specializing in human rights, racial justice and LGBTQ rights. Their passion comes from being raised by people who stressed the importance of change through community action. In 2020 Jordan can’t wait to keep creating with Echoing Ida, a cohort of Black women and non-binary folk across the country, and working with local non-profits such as RISE Chattanooga.

Erika Roberts’ artistry began 36 years ago in elementary school. Erika was introduced to poetry in the 5th grade. As a kid, she realized that she had a gift for words. She played with them like kids in dirt, absolutely covered. She also noticed that she had a great relationship with creativity. It moved her to use words in ways that the reader could feel her vision. Erika doesn’t just create art but she is art. She sees art as a way to communicate. It has its own language. She is inspired by love, life and brilliant laughing. Having a collaborative spirit is crucial to her as we build communities of artists.

Anthony M. Wiley is a creative philosopher, mindful speaker, musician/producer, and father to his brilliant daughter Hasi. As a complement to his formal education received at Alabama State University, he credits much of his learning to being an autodidact. In addition to his endless pursuit of knowledge and creating, Anthony has spent the last seven years serving in the United States Navy. He's served two tours overseas and received a Navy and Marine Corps Achievement Medal, Coast Guard Expeditionary Medal, and the Global War on Terrorism Expeditionary Medal. Anthony, using a holistic approach, provides tools to help us navigate this long, tedious journey of life and find the will to change. He currently resides in Chattanooga, TN.

Jody Harris is an acclaimed poet, visual artist and art historian with a B.A. in Studio Art, a B.F.A. in Illustration and a M.A. in Sculpture from Georgia State University. With work housed all over the world, he has professionally created groundbreaking and texture-rich pieces and performed as a spoken word artist and open-mic host for well over twenty years. Jody and his wife, Keelah Harris, are currently working on an audio-visual project, Shine Language Fluent, which will be released in 2020. They are the curators and owners of Keeody Gallery located in downtown Chattanooga, TN.

Keelah Jackson Harris is an award-winning educator, writer, singer/songwriter and visual artist with a B.S. in Political Science from the University of Tennessee Chattanooga and an M.S. in Education from the University of Tennessee Knoxville; she has been a multifaceted creative since childhood. Keelah and her husband, Jody Harris, are currently working on an audio-visual project, Shine Language Fluent, which will be released in 2020. They are the curators and owners of Keeody Gallery located in downtown Chattanooga, TN.