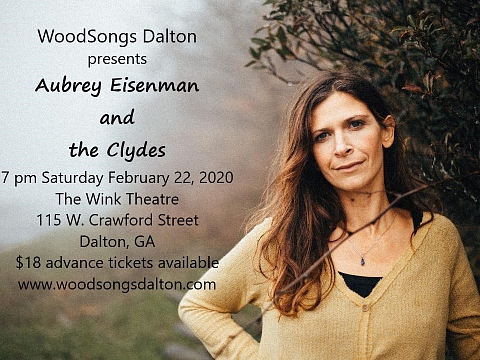 The WoodSongs Dalton 2020 February Concert will feature Aubrey Eisenman and the Clydes on Saturday February 22 at the Wink Theater in downtown Dalton. The concert series features national and regional Americana music, providing the North Georgia area with family friendly music while benefiting local non-profits. The concert will begin at 7:00 pm with Spatial Effects opening.

Aubrey Eisenman & The Clydes are an Asheville-based Americana/Bluegrass act. Since signing with Mountain Fever/Travianna Records, they have had two hit singles on Bluegrass Today's Grassicana Charts for the last 8 months! Their last album "Bowerbird" was also just named on the Roots Music Album Top 50 Albums for 2019.

Aubrey's songwriting has placed in national songwriting competitions over the last few years and the band has appeared on stages including Merle Fest, Aiken Bluegrass Festival and four separate appearances at The International Bluegrass Music Association’s World of Bluegrass. Aubrey's presence in the Asheville music scene is well known to include her founding of the annual Women in Music Series which sells out theatre venues every year and highlights performances of iconic female artists. Her husband and standout guitar player in the band, Justin Eisenman, is a well-respected luthier in Asheville, NC as well as a regionally recognized flat picker. “There’s something about their sound that’s really different. When you hear them play it sounds really familiar, but then you realize it’s like nothing you’ve ever heard before.” – Mark Hodges, President of Travianna Records.

Opening for The Clydes, will be the Northwest Georgia based Spatial Effects, a band known for its delivery of old hymns and classic rock tunes in a bluegrass wrapper, as well as its tendency to sometimes throw a few curve balls at audiences. The band’s recipe for music includes two and three fourths music degrees, a few award-winning songwriters, plus an off-the wall- sense of humor with their slightly bent originals. The band has opened for some heavy hitters including Claire Lynch, Becky Buller, and the Goose Creek Symphony at a variety of venues ranging from country churches and regional festivals to the highly acclaimed River Bend Festival.

This regionally acclaimed concert series features emerging and established performers and will be held at the Wink Theater, located at 115 Crawford Street in downtown Dalton Georgia. During its 10-year history the series has featured performers who are Grammy nominees and recipients, and or received recognition for their talents by the International Bluegrass Music Association and SPBGMA.

The concert series is sponsored in part by the Dalton Convention and Visitors Bureau, Friends of WoodSongs, and numerous local business sponsors. Tickets are available at the Dalton Freight Depot Gift Shop, The Ice Castle, Bigham Discount Music, at the door, and online. Proceeds from the concert will benefit the DEO Clinic, a 501(c)3 that provides medical care to low income uninsured individuals. Proceeds up to $2500 will be matched by Modern Woodmen of America. For tickets or more information about the concert series visit: www.woodsongsdalton.com.