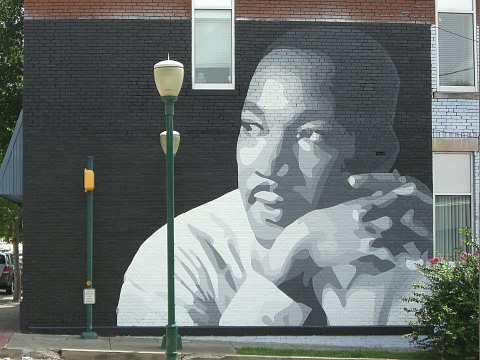 So...you wanna to paint a mural but don't know where to start, huh? Maybe local muralist Kevin Bate can help. He'll walk you through all the steps, equipment and pitfalls of painting murals. Learn from Kevin's mistakes made during dozens of murals over the past eight years.

Kevin Bate moved to Chattanooga in 1995. He had flirted with a career in art a few times (bought it drinks, took it out on Valentine’s Day, etc.) but was never quite able to commit to it. In 2011, all of that changed. Married with a newborn, Kevin decided (for some crazy reason) that this was the perfect time to attempt another launch of his art career. One afternoon while his infant son was sleeping, Kevin snuck out to the shed to look for art supplies. What he found instead was plywood, house paint and one inch brushes.

Understandably, his first paintings were quite large. This is probably how he jumped to murals so quickly. Since then, his works have appeared everywhere from the Southside, MLK Blvd, the North Shore, Highland Park and venues such as Track 29. If it’s a painting of a large face on a building, it’s probably his. Kevin (who abhors the traditional art-speak artist’s bio) has recently finished a memorial mural for the Fallen Five. It is the newest addition to The McCallie Walls Mural Project, a neighborhood beautification and paying-artists-a-living-wage-for-their-work project that he also curates. Lately, he has been branching out further into the South East and has painted a mural commissioned by Usher.